Feast of the Holy Family of Jesus, Mary, and Joseph, Year A

One of the most interesting things I get to do as a priest is offer spiritual direction, though my ability to offer it now that I am a pastor has diminished significant. In spiritual direction, I listen to people describe their prayer life or their moral issues or their difficulties with God, and my job is to try to identify the origin of these problems and to recommend a remedy.

In the course of these conversations with dozens of people over the last two-and-a-half years, I have discovered something that many other priests tell me they have discovered, too: that a person’s default image of God is almost always based on how they have experienced their relationship with their own father.

Allow me to provide an example from my own life. In the last couple of months, I have come to realize that my prayer is dominated by concerns about our parish, to the exclusion of every other kind of prayer. This is not uncommon for a new pastor, but it fit a pattern for me that predated my arrival at Assumption, so I regarded it as a spiritual movement that I needed to pay attention to. It reminded me that, since at least undergraduate, if not earlier, my dominant image of God has been as a general, or as a boss, as, maybe most accurately, as a mentor, who is working with me and training me for a task. In the Scriptures, I relate most to the Apostles, who walked with Jesus but who also eagerly awaited orders from him.

Well, as I tried to understand why I see God this way, and whether it is a pattern of prayer that I need to be worried about, I realized that this relationship is the same relationship that I have with my dad. In the ten years that I lived with Steve Moore, a good number of my memories with him involve being in the garage or at the boat accomplishing a task together. And after my parents divorced, the vast majority of my time visiting him has been used to work on projects together. In other words, the way in which I bond with and grow closer to my father is by engaging in a common undertaking, with him leading the charge. It really should come as no surprise to me that when I want to bond with God, I bring him a project and ask him to help me with it.

The fact that our dominant image of God so often comes from our dads can be a good thing or a bad thing. For some people, their experience of their fathers is healthy and well-ordered, and his example helps them understand and believe that God, too, is loving and caring and supportive and strong and honorable and trustworthy. But for other people, dads can be flawed, broken, and complication. If, for example, a dad only shows his approval when a child is successful, and he flies off the handle at even a minor mistake, it is easy for that child to see God, also, as a disciplinarian whose love must be earned and whose affection can be easily lost. Or if a dad is emotionally distant, it is easy for a child to believe that God has no interest in a relationship with them.

Is this always true? No. Are there exceptions? Certainly. But I would not be preaching about this dynamic if it were not striking just how prevalent this pattern is. On the whole, our relationships with our dads really do shape our relationships with God. It is not for nothing that Jesus called God our Father.

But, of course, we Christians believe that God is always calling us to growth and holiness, so it would be wrong to say that our relationship with God is permanently stuck at the same level as our relationship with our fathers. God always gives us the ability to heal and to grow. How does he do this?

First, he gives us the gift of insight. He gives us the ability to look back on our childhood experiences and ask what was good and what was bad about them. We can learn to identify the virtues and vices of our fathers, and we can ask which of these virtues and vices we have applied to our image of God. In what ways, for example, did my father model for me a healthy and loving fatherhood? These are going to be the places where I most powerfully see God and where I find the most spiritual strength. These are the places where God is going to give me consolation. These are the places where, even if my father was amazing, I can be certain that God is perfect. But then we also have to ask ourselves in what ways was my father, even though he may have been trying his best, imperfect? In what ways did I not experience the love of my father in the way I would have liked to? These are usually going to be the same places in which we struggle in our relationship with God. By identifying these broken aspects of our relationship with our dads, we can then guard against applying these characteristics to God. Just because Dad was strict does not mean God is strict. Just because Dad was distant doesn’t mean God is distant. In fact, because we know that God is perfect in all ways, we can trust that God’s perfect love and heal the wounds that our fathers may have left us.

Second, God allows us to grow by us the model of St. Joseph. I have worked with people whose relationship with their earthly father was broken enough that they felt completely unable to approach God without unhealthy fear or the expectation of disappointment. So I send them to St. Joseph, who is often less threatening and more approachable. I ask them to imagine what various childhood memories would have been like had St. Joseph been their father. How would St. Joseph have handled that situation which my dad handled poorly? Of course, St. Joseph was the only member of his household who was able to sin, so he is not perfect, but God chose him to be the foster-father of his only begotten son, so he’s probably still going to be pretty good.

Now, it goes without saying that mothers are incredibly important, too. There has been remarkable research done in the last couple of decades that shows that, for the first year of a child’s life, that child’s ability or inability to bond with its mother results in life-long emotional and relational patterns that cannot be undone or rewritten. Healthy relationships with our moms are essential for healthy and happy lives. And I am sure this is why Jesus made sure that his own mother became a central figure in Christian spirituality, so that we would always have a mother figure to guide us, direct us, and pray for us.

I haven’t spoken much about mothers here simply because I haven’t offered enough spiritual direction to see how the influence of our mothers emerges in our spiritual lives. But insofar as someone needs to heal a broken relationship that they had with their mother growing up, I would send them to Mary in the same way that I send people to St. Joseph. Mary is the perfect example of motherhood. Whatever our mothers have done well, Mary can do for us even more perfectly; and whatever our mothers have not done as well, Mary can supplement with her motherly perfection.

My friends, I do not envy parents. Being a parent is probably the hardest job in the world. It is difficult enough just keeping kids alive and fed. Imagine also having to worry about their emotional, relational, and spiritual lives, too. We should all be thankful to our parents just for being parents, and we should honor them, love them, and pray for them, exactly as the Scriptures tell us to do. I would recommend that every family pray to the Holy Family, because only with the model and intercessions of the Blessed Virgin Mary and St. Joseph can a family ever begin to be holy.

But even the best parents are not perfect. We are all human and we all fail from time to time. I hope it is a consolation to every parent, and to every child, that God has also given us his own parents as our own. Mary and St. Joseph are not just distant models to be imitated, but active members of the communion of saints who pray for us and minister to us. If we are struggling as a parent, we have great intercessors in heaven. If we struggle as a child, or are struggling now with our memories from childhood, we have another set of parents to comfort us and to guide us. God loves families and created them to be the central reality of human life and community. He will always give us the graces necessary to live our familial vocations, and to heal whatever has been broken in our families by sin.

The Holy Family is our model, and we are so blessed to honor them today. 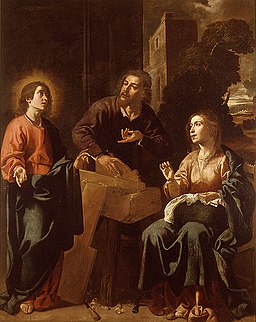