The Nativity of the Lord

A college friend of mine used to tell the story of the worst Christmas homily he had ever heard. He shows up to church on Christmas (Christmas! You know, everyone’s favorite Christian holiday, associated with hope, joy, light, peace, and good cheer, whose central image is a baby and his mother); he shows up on Christmas and the homily begins something like: “The cacophony of sin surrounds us and threatens to envelop us like a dark cloud.” Joy to the World, am I right?

Of course, now that I am a preacher myself, I can see how this could have ended up being a good homily. Contrast the cacophony of sin to the silence of Bethlehem; talk about how the enveloping cloud is conquered by the star and the angels. It could work! But, given how my friend tells this story, I am fairly certain that is not where the homily ended up going.

Well, preaching is always a risk, and I am very aware that, if I am not careful, I, too, could someday become “cacophony of sin guy,” whose homily lives on only at family parties where they relate how, that one time, Father just did not get Christmas. And I am telling you this because this homily begins with some depressing statistics. But I want to assure you, there is a star at the end of this journey and we will finish in Bethlehem.

So, what are those depressing statistics? According to the latest Pew Forum Survey of American Adults, Christianity continues to decline in this country at a rapid pace. In the last twelve years, the number of Americans who call themselves Christians has dropped from 78% to 65%, while the number of Americans who claim no religion in particular has climbed from 16% to 26%. If these trends continue, in 15 years the United States will no longer be majority Christian and in 30 years we will be majority unchurched.

There is one bright spot, though. Even today, only 4% of Americans are atheists and only 5% are agnostic. That means that 91% of Americans still believe in God or some universal spirit.

This shouldn’t really surprise us. Regardless what certain corners of the internet would like you to believe, the existence of God is a universal human belief across cultures and eras. People pray when they are scared; no one truly doubts that they have free will or a soul; everyone who looks at creation feels a sense of awe and is aware of a connection to a force much greater than themselves. Every child I have ever worked with has an innate religious sense, an innate sense of God, that only leaves them when they lose hope and wonder and trust. It is not that we grow out of believing in God, it is that, for some of us, God is hidden from us by the cruelty of the world.

Nevertheless, even as Americans are rapidly abandoning church and creed and religion, they are not abandoning God. The vast majority of Americans still claim to be spiritual and still claim to pray, just not to a God that is defined by any institutional religion.

In light of this, we ought to ask ourselves if these trends really matter. If 9 out of 10 Americans still pray to some kind of god or universal spirit, does it really make a difference how many of them are Christian? In other words, is there anything better or worse about, say, “communing with the Force,” à la Star Wars, versus worshipping the God of the manger, as we do [tonight/today]?

I mean, obviously I am going to say, “Yes”, Jesus matters. This is a Christian church on Christmas. Duh. But why? Why does Jesus matter?

And this, my friends, strikes me as a very dangerous tendency. Humanity is deeply flawed, so if we simply create the god we want, that god will be deeply flawed, too. If we begin to think that our own opinions, desires, and outlooks are not just our own, but also have a divine mandate, we take everything good and everything bad about ourselves and multiply it one-hundred-fold. We stop being skeptical of ourselves and start believing our own lies.

Now compare this to the God of the manger, the God of Abraham, Isaac, and Israel, who revealed himself to the Jewish people and then chose to be born into his own creation, at a time and place we can pinpoint with relative accuracy.

This is not a God we can invent to fulfill our wishes, because this is a God who exists outside of ourselves, with his own personality, his own teachings, his own plans. He spoke first to Abraham, then to Moses, then through the prophets. At every turn, his revelations to the Jewish people were recorded for future generations and compiled into the Old Testament, a collection of documents which is far more challenging to the human heart than affirming of it. This is not the God of wish fulfillment.

But then, far beyond anything humanity could ever have hoped for, God took upon himself a human nature and walked among us. No serious scholar doubts the existence of Jesus of Nazareth, but it would be pretty easy to say that Jesus did not fulfill any of the messianic desires. The Jews longed for a Messiah who would overthrow the oppressive Roman power, who would begin a definitive era of peace and prosperity, who would vindicate the long-suffering Jewish religion. But, only a few decades after his death, not only had Jesus not done any of these things, but Jerusalem and its temple were destroyed.  Jesus is clearly not the messiah of wish fulfillment.

There is another, crucial way in which worshiping Jesus instead of a generic spirit makes a difference, and that is who drives the relationship.

I hear often from people that they do not go to church because they much prefer to find God in nature, or in family, or in friends. And I totally get it. I, too, have felt the spark of life in many of these activities. But the downside with this approach to the divine is that it always ends up being our responsibility to find God. We have to reach out, we have to search. And then, if we cannot find God anymore, if we become depressed or lonely or numb, we suddenly start asking whether it is our fault, whether we were not looking hard enough, whether we are being punished by God for some reason.

But this is not how God works, or at least not how the God of the manger works. The God of the Israelites, who also was born into time by the Virgin Mary, is always the one who drives the relationship. He does not wait for us to seek him, because he is always, always seeking us. Even when humanity sinned and abandoned him, God did not give up on us. From the very moment that Adam and Eve fell from the Garden, God initiated a master plan for our redemption and restoration. No matter how many times the Israelites abandoned their covenant with him, he always brought them back, he always restored them, he renewed his covenant. And then, when he was ready to carry out his plan on a universal and eternal stage, God took upon himself a human nature and became one of us. God chose to live our life, with all of the difficulties and weaknesses and flaws. He chose to live our death, even on a cross. God desired so deeply to be in relationship with us that he himself became a human being.

The Christmas images show us just how extreme God’s love for us is. He was not born in Rome, the center of government and culture, but in Bethlehem, a suburb of a backwater Roman province that no one in the Mediterranean world at the time had any respect for. Jesus was not born to a king or a governor, but to a blue-collar construction worker and his suspiciously pregnant wife. And he was not born in a palace, but in a cave where animals slept, a place where no amount of frankincense could compensate for the smell.

Yes, it does make a difference whether we worship Jesus or a generic deity, because a generic deity is a black hole of love that sucks all of our energy and love, while the real God, the God whom we know as the Father, Son, and Holy Spirit, this God is a well of infinite love who will fill us to overflowing if we simply open ourselves to him.

My friends, the reason so many people leave the Catholic Church but do not abandon their belief in God is because, at some point in their life, they looked for God and did not find him here. Maybe it was an ideological difference, maybe it was the scandal of clerical sexual abuse, maybe it was the hardheartedness of the priest or the community. We may never know. But my heart breaks for these people, because when they did not find God here, we effectively sent them out on an impossible quest, to find a God who cannot fulfill them or make them happy. We sent them into the arms of a God who is merely a mirror of ourselves, with all of our flaws and corruptions.

If you are one of these people, who have walked away from weekly Mass and are only back today because you are with family, or because you figured you should at least come for Christmas, I am sorry. I am sorry that you looked for God and did not find him here. That is our fault. There is nothing wrong with Jesus, only with his followers. Jesus continues to pursue your heart and continues to do everything in his power to have a relationship with you. I hope you will give him another chance, whether that is here at Assumption or another Christian church.

My brothers and sisters in Christ, it is indeed a Merry Christmas. No story could bring us more hope than the Christmas story, in which we see once again the extremes to which our God will go to show us his love. I do not need a God of wish fulfillment. In the manger, my every wish has already been fulfilled. 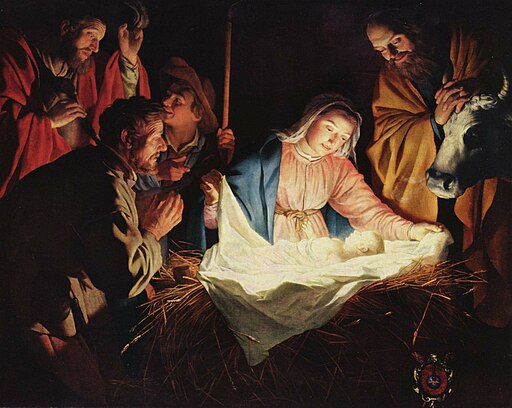