Preached on the Baptism of the Lord (Year A) at Assumption Parish in Bellingham, WA

Over the last couple of months, I have felt an increasingly strong call to preach about the liturgy here at Assumption. As I hope I have made clear before, I am Catholic because I believe that the Church, guided by the Holy Spirit and preserving the wisdom of generations upon generations, is much smarter than me. And it is in the liturgy, in the tangible and experiential expression of Christian worship, where the wisdom of the Church is most powerfully on display.

However, in order to preach about the liturgy, I had to make a choice. Should I try to shoe-horn liturgical topics into the sequence of readings, or should I preach about it all in a row, like a Protestant pastor might offer a preaching series? I opted for the preaching series, but that means I have to offer you an apologize as we begin this series. The Word of God contained in the Scriptures is truly the voice of God continuing to speak to us today. I will not be preaching on the readings for the next couple of months, and that is a disservice to you. But leadership is about balancing trade-offs, and I decided that it was also a disservice to you to spend your entire life going to Mass and not hearing about the richness of the worship you are offering. So I made a choice.

Despite this, I hope that you will continue to study the Sunday readings at home, so that you can continue to hear the voice of God speaking through them. And given that this preaching series will likely continue through Lent and maybe into Easter, I hope that you might consider giving this year’s Lent a liturgical focus that includes an attempt to attend daily Mass or to read a book about the Mass.

Now, given that today, is the Baptism of the Lord, I am going to start our series by preaching about the liturgy of baptism. This is entirely appropriate because, from the sacramental worldview of Catholicism, baptism is the beginning of our life in Christ, and nothing else in our liturgical or sacramental life is possible apart from baptism.

The principal and foundational baptismal liturgy is not, as we might suppose, the baptism of children, but is instead the baptism of adults. This is because Catholic liturgy and Catholic sacraments always build off of and continue the practices of earlier generations of Christians. In the first centuries of the faith, the majority of Christians were converts, meaning the majority of baptisms were for adults. This only changed with the legalization of Christianity in the 4th century, but by then our sacramental formulae and practices had begun to solidify, and it has continued to be the adult baptismal liturgy of the Easter Vigil which serves as our starting point.

Nevertheless, I am going to focus on the Rite for the Baptism of Infants today, since that is what most of us experience on a regular basis. Just remember throughout that the liturgy for infant baptism is a modification of an adult baptism. Keep in mind also that by default infant baptism is its own stand-alone liturgy; when we add it into the Mass, that is a further modification of the original liturgical practice.

The original and most important effect of baptism is unity with Christ, specifically united with him in his death and resurrection. It is through baptism that we join ourselves to Jesus and, though him, participate in the inner life of the Trinity. This is why many theologians believe that Jesus chose to be baptized, because the idea that baptism brings unity with him is more powerful if we can see that he himself experienced baptism.

Because baptism brings us unity with Christ, it also has other three other effects. It unites us to the Body of Christ, the Church. This is true whether a person is Catholic or not. Because we believe in only one baptism, we believe that even Protestants are brought into communion with the Church through baptism, even if that communion is imperfect because of our divisions. Second, baptism washes away our sins, including original sin, because sin cannot coexist with Jesus. The Resurrection was Jesus’ victory over sin and death, so if baptism unites us to the resurrection of Jesus, then at the moment of our baptism we share perfectly in Jesus’ victory over sin. Finally, baptism opens us to sacramental grace. Our unity with Jesus in baptism permanently configures our souls to be receptive to his work in us, including and especially his work in the sacraments.

Now, to the ritual itself. The baptismal liturgy begins at the door of the church building, as a sign that the unbaptized person is not yet a member of the Church. This is why baptismal fonts are supposed to be located near the entrance of church buildings, as a constant reminder that we can only enter the church through baptism. When Assumption was originally built, the room we currently use for confessions was instead a special room for baptisms called a baptistry, located immediately inside the main doors of the church. Once most people began entering the church from the parking lot, and we added the gathering space, we constructed a baptismal font in that entrance. This is also why we sign ourselves with holy water when we enter a church building, as a reminder of our own baptism through which we first became members of the Church.

Also of note, though few couples choose this option at their weddings, the marriage liturgy and the funeral liturgy are both supposed to begin with the minister greeting the couple or the body at the doors of the church, as a way of explicitly connecting those two pivotal life moments back to the moment of baptism.

At the doors, the minister asks the parents and godparents to explicitly affirm that they desire baptism and are willing to take on the responsibilities that it entails. Since the early days of the Church, there has been a debate about whether it is appropriate to allow parents and godparent to speak on behalf of the child but remember that the primary purpose of baptism is unity with Christ. A child born into a Christian family is presumably going to be raised to love and worship Jesus. Just by raising the child, the parents and godparents are already making a commitment of faith on behalf of the child. It would not make sense to have a child raised in the faith but living apart from the Body of Christ because of a lack of baptism.

Once the parents and godparents have requested baptism, the child is received into the church where all in attendance hear the word of God and a homily in preparation for the sacrament. When baptism is combined with Mass, the readings of the Mass replace the baptismal readings.

Once everyone has arrived at the font, the minister blesses the water with a beautiful prayer recalling all of the ways in which God has used water to save his people throughout creation and the Old Testament. After this, the parents and godparents are asked to reaffirm their faith using the ancient Roman baptismal affirmation that today we refer to as the Apostles’ Creed. They must recite the creed again, because if we are assuming their child is going to be raised in unity with Christ and the Church, we need to make sure the parents and godparents believe the same things that the Church believes.

Following this, the child is baptized. A valid baptism must always use pure water that is flowing or moving in some way (we achieve this by pouring or dunking), and the baptismal formula must always be trinitarian. These things are essential because the Church can only perform the sacraments as they were given to us by Jesus and the Apostles. Jesus’ own baptism was in moving water, as were all of the baptisms performed by the Apostles. And in the Gospel of Matthew, Jesus specifically tells us that we must baptize in the name of the Father and of the Son and of the Holy Spirit. The Catholic Church recognizes all baptisms done in this way as valid, even if they are done in another Christian church.

Note also that a person’s name is always used during baptism, something that only happens here and at Confirmation and in none of the other sacraments. This shows us how personal baptism is. God recreates us personally.

After the anointing comes the recognition of the white garment, an outward sign of the cleansing from sin that comes from unity with Christ.

Following that comes the candle, handed on to the parents and godparents as a remind that it is their responsibility to foster and maintain the faith of the child as it grows older. But notice that these candles are always lit from the Paschal Candle, the candle that was used during the baptismal liturgy at the Easter Vigil. Here we see an explicit connection between the normative baptismal liturgy of adults at the Vigil, and the modified baptismal liturgy of children throughout the year.

After this, there is the Ephphatha Rite, where the priest signs the mouth and ears of the child with the sign of the cross, accompanied by a prayer that the child will grow up to hear and to preach the Word of God. Unfortunately, this prayer still uses the older English phrase “deaf and dumb” which is rather uncouth in today’s parlance (you can chat with your deaf friends about why this is), so I say it quietly when we do baptisms during Mass. It is possible that the soon-to-be-released updated translation of the Rite of Baptism will change this to “deaf and mute” which would be better.

Finally, as with most liturgies, the Rite of Baptism ends with a blessing and sending forth.

Now, I understand that this may have been interesting for some of you and dry for others, so I will end with a point of spiritual reflection. Everything in the Rite of Baptism is a tangible symbol of our unity with Jesus. At the moment of our baptism, we are perfectly united to Christ. This means that, at our baptism, we are united to Christ at his baptism, where the Father spoke the words “This is my beloved son, with whom I am well pleased.” Our unity with Jesus through baptism is so perfect that we can say with confidence that the Father speaks these words over us as well. “This is my beloved son; this is my beloved daughter, in whom I am well pleased.” We would do well to try to hear and listen for these words every day of our lives. 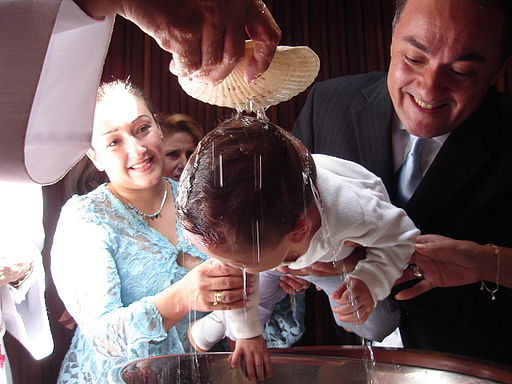