Preached on the 2nd Sunday in Ordinary Time (Year A) at Assumption Parish in Bellingham, WA

We refer to the Holy Mass both as a banquet and as a sacrifice. The prayers of the mass move seamlessly among those mysteries. On the one hand it is a Eucharistic meal, that reaches back in time and forward to eternity. The mass participates in the Last Supper and in the timeless celebration in heaven. On the other hand, we refer to this as the Sacrifice of the Mass. In that sense, it re-presents, or makes us present again to the Passion, Death and Resurrection of Christ, what we refer to as the “Paschal Mystery.”

Those two elements, the Bread of Life and the Pascal Sacrifice, which rest comfortably side by side in the Liturgy, have deep roots in the Old Testament. We can go back to the very beginning of the Bible and follow each of these two threads forward as they weave and crisscross through the scriptures until finally, at the Last Supper, Jesus ties those two threads together, bread and sacrifice, in the words, “Take and eat of this … This is my body which will be given up for you.”

Sometime later we will take up the theme of bread from heaven, which is all over the bible. In the coming weeks Father will be instructing us at length on Liturgy. For today, we will follow the thread of Paschal Sacrifice through the Old Testament, and look at a few of the events that fore-shadow the sacrifice of Christ and the mass.

We start with two small details found in the book of Genesis, that begin to hint at the idea of the sacrificial animal. After Adam and Eve sinned, Adam blamed Eve and Eve passed the blame on to whom? to the serpent, the lowliest of animals.

Also in Genesis is the story of Cain and Abel. It’s not important to this discussion whether they are metaphorical figures in the sacred story or actual historical individuals. The point that matters here is that by the time Genesis was written, two things were well-fixed in the human consciousness: First, that people should offer sacrifice to the almighty, to give something back as an act of thanksgiving or in reparation for sin. And 2nd, that sacrifice should be taken from the best that we have. Thus Abel’s sacrifice from his flock was said to be more pleasing to God than Cain’s offering from the field.

Looking ahead, the death of the Son of God is the ultimate sacrifice, the best that we have to offer. In the books of the law, we see that offering sacrifice for sin became a formalized ritual. In Leviticus chapter 1 there is a detailed description of how one should make a sin offering to God. It says, “To find favor with the Lord, bring the holocaust — that’s the lamb, or whatever animal you’re going to burn — to the meeting tent, then place your hands on its head to make IT a worthy sacrifice for YOUR sin.”

Two relevant points here: First is the implication that sin against God is so serious that it actually warrants death. Second is the symbolic transfer of guilt from the actual sinner to the sacrificial animal, the scapegoat if you will, which is sacrificed in the place of the sinner.

Moving ahead in the Bible, the chosen people were living in slavery in Egypt and God sent Moses to free them. There’s a lot to that story, I hope you read it in Exodus, but the pivotal moment was the night of the Passover. The word Paschal, by the way, is derived from Passover. The people were instructed to sacrifice a lamb and eat it’s flesh. Notice the dual meaning explicitly present which foreshadows the Mass as a sacrifice and a meal. Then they put the blood of the lamb on the wood of the door, the angel of death passed over and they were set free.

At the Last Supper, which was a Passover meal, Jesus gives us His flesh as food on the night before he is sacrificed and His blood is shed on the wood of the cross. By that saving act we are set free from the slavery of sin and death.

Throughout the Old Testament there are references to the “suffering Savior.” Both Jeremiah and Isaiah refer to the Savior as, “like a lamb lead to the slaughter.” And we hear today from the last of the prophets, John the Baptist, who points to Jesus and says, “Behold the lamb of God, who takes away the sins of the world.” John is referring to the redemptive act of Jesus, who will be the sacrificial lamb offered so that our sins may be forgiven.

Those words of John, “Behold the lamb of God…” are part of the Holy Mass because they express the meaning of the mass as the Paschal sacrifice. And we say those words just before we receive the body and blood of Christ as food. Brothers and sisters, the Holy mass is not an accident, but an intentional gift from God. Jesus Himself instructed the Church: “Do this in memory of me. ” So we gather on Sunday to worship God along with the angels and the saints in heaven, we give thanks for the salvation won for us by the sacrifice of Jesus Christ and we are nourished once again on the bread of life. 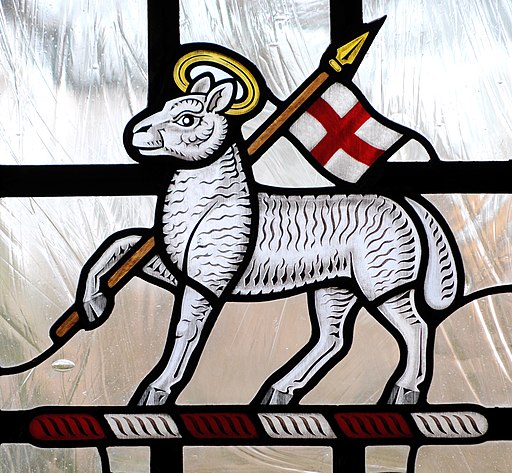