First, I have heard from many of you about my homily last weekend. Thank you for your openness with me. Christianity is a collaborative effort, and I am glad we can be on this journey toward Jesus together.

Now, what is the most consequential plane trip you have ever taken?

But, to be honest with you, regarding the most consequential plane trip I have ever taken, the one that has had the most lasting effect on my life, I cannot even remember where I was going. I sat next to a guy – I can’t tell you his name – who was a Protestant of some sort – I can’t remember his denomination – and we chatted for the length of the flight about faith and religion. I cannot even say what he told me exactly, but I regard this as the most consequential flight of my life because before I got on that plane I was inconsistent about being generous with my income, but when I got off that plane I was convinced that I needed to give a full 10% of everything I receive to God.

My vague recollection of the conversation is that he talked about how many blessings he had received in his life, and he associated these blessings very strongly with the fact that he tithed. He talked about good times and hard times, about times when it was easy to give and times when it was difficult, and at every moment he believed that his practice of giving the first 10% away was the reason God had continued to bless him. In hindsight, I have no idea why this conversation had such an effect on me. I have felt very blessed by God my entire life, and I was not looking for additional blessings of any kind. Plus, I knew enough about theology at the time to know that a transactional relationship with God, where we only do something in the hopes that God will reward us, is a pretty shaky foundation for a spiritual life. But despite this, there just seemed to be something in his demeanor, something in his animation when he spoke about tithing that convinced me that he was holy and that somehow his practice of giving had led him to that holiness. So by the time I had finished that flight, a seed was planted in me; I knew that I needed to give away 10% of my income to God. It took me a couple months of hemming and hawing and avoiding it, but I could not shake the conviction. In the Spring of 2012 I started giving away the first 10% of everything I received and since that time I have never looked back.

My friends, I assure you tithing has not been good to me because of Catholic guilt. It is not because I felt bad for my parish or my Archdiocese or because someone made sad puppy dog eyes at me. It is not even because I was particularly impressed with the causes I was supporting.

No, I have found great joy in tithing because tithing has brought me an incredible freedom, in two ways.

First, making the decision to tithe has made supporting various causes so much less of a chore. At the end of each year, as I am reporting my income to the IRS, I take 10% of my pre-tax income, and I resolve to give that amount away in the next year. Which means that as I am approached about different throughout the year, I no longer feel burdened by the question of whether I am going to give my money away. I have already made the decision to give it away. Instead, the only burden I feel is in determining how to give it away. I feel so much freer to give because I tithe.

The second way that tithing has brought me freedom is that, since I began tithing, I have felt less and less tempted to be greedy, miserly, or tight with my money. Money is one of the four classic idols, along with power, pleasure, and honor. It is very easy for us to become addicted to the accumulation of more and more wealth. But for the seven years I have been tithing, which were the leanest economic years of my adult life, by the way, living off of tiny stipend checks and Knight of Columbus support, for the entirety of those seven years I have not spent one day worrying about money. By giving away my first 10%, I prevent money from ever becoming my idol. By giving away my first 10%, I remove any power the remaining 90% was ever going to have on me.

What does all of this mean concretely? Regarding our families and our lives, it means going to Mass, even when our spouse does not want to come with us. It means staying true to the faith even when we risk exile or persecution from our families, friends, or society. It means choosing Jesus, even when that means making a change in our lives that is uncomfortable or difficult, pursuing a virtue that feels like a form of death.

But regarding money, things get more difficult. When our family or our lives come in conflict with Jesus, we are usually presented with a clear moment of choice. With money, however, the choice is not always obvious. Clinging to our possessions usually does not look like walking away from Jesus or the faith. Clinging to our possessions instead usually has the long term, harder to notice effect of a shriveled heart that no longer feels open to the Lord or to others. And this is why tithing is such an important tool in this battle: because tithing establishes a practice of regular giving before it becomes a problem. Tithing sets us up for spiritual success.

Now, this weekend is going to serve as our stewardship weekend for the year, so there are a few practical matters I would like to attend to before we conclude.

First, before all else, I want to acknowledge how easy it is to feel nickeled-and-dimed. On top of the annual needs of the parish and the school, we have multiple diocesan and national second collections, additional missions and ministries that ask for our support, various parish groups doing regular fundraisers, and then all of our personal causes like alma maters and political groups. Every day someone wants us to write a check. And of course, here at Assumption we recently completed our Raise the Roof Campaign just in time for us to hear about the upcoming major Archdiocesan Capital Campaign. You are not alone if you feel overwhelmed.

The staff will tell you that I wanted to desperately to stand up here today with a plan to alleviate this feeling by reducing the number of asks throughout the year. I wanted to get rid of the second collections entirely, and just write checks for a standard amount from our outreach budget. I wanted to treat the Annual Catholic Appeal like the tax it is and create a budget line item for it so that we never had to ask about it again. I wanted to double our annual maintenance line item so that we could do a better job of budgeting for long-term repairs, rather than doing fundraisers for them. But, though I would still like these things to happen in time, I am not going to make promises I cannot keep, and we are not yet in a place where these things are possible.

Instead, I can merely reassure you that a practice of tithing, a practice of dedicating, at the beginning of the year, a specific amount to give away, makes the nickel-and-diming hurt a whole lot less. When I have already decided to give my money away, the different asks feel like less like an annoyance and more like a buffet of opportunities to do what I have already resolved to do.

Second, we will not be emphasizing parish stewardship and pledge cards this year, because we will be spending the fall focused on the Archdiocesan Capital Campaign. This means that we are simply going to assume that whatever you pledged to the parish last year you are also willing to give to the parish this year. If that is not the case, and you would like to change your pledged amount, or if you did not make a pledge last year, there are cards in the pews with which you can make that adjustment. You will also see that this week’s bulletin contains a report on our parish finances from last year. It is your hard-earned money that we are spending, and you deserve to know how we are spending it.

Finally, I want to touch briefly on the difference between annual stewardship and a capital campaign. The 10% that I give away every year is my annual support for causes that I care about. I typically give a third of that money to my parish, a third to the Annual Catholic Appeal (knowing that some of this money will always come back to my parish), and a third to other worthy causes like Catholic Community Services and Catholic Housing Services.

A capital campaign, however, is intended to be something extraordinary, beyond my annual stewardship. In the upcoming Archdiocesan Campaign, for example, I committed an additional 3% of my income to the campaign over the next three years. Because these campaigns are intended to be extraordinary, they are also only supposed to happen once every 5 – 10 years. The fact that this new campaign is happening so soon after Raise the Roof is unfortunate, and I am truly sorry about that. It was out of our control.

Over the next few months, you will be hearing about the upcoming diocesan campaign, but given that you are probably tired of hearing about campaigns, I want to assure you that, even though it is very important, we are not going to let it dominate our spiritual life here at Assumption. You will hear about it once in September, once in October, and twice in November. If we have other fundraising announcements, we will try to limit them to those weekends as well.

My friends, despite all these practicalities, I don’t want us to think of tithing as a chore or an obligation we undertake out of guilt. I truly have found it to be a joy in my life and a path to spiritual freedom and a closer relationship with Jesus. I hope that you can experience this, too. Thank you for your openness to what the Lord wishes to do through you. 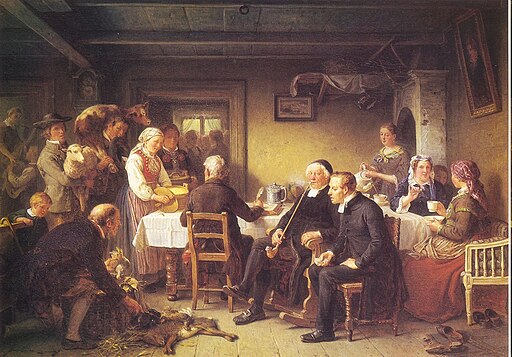