Preached at Assumption Parish in Bellingham (All Masses)

In his book You Can Understand the Bible, philosopher and Catholic apologist Peter Kreeft described the book of Ecclesiastes, the book of our first reading, as “the question the rest of the Bible answers.” Allow me to explain.

If you have never read Ecclesiastes, which is today often called Qoheleth by Biblical scholars, read it. It is haunting and it gives Biblical expression to a dark side of human experience that many of us feel but are hesitant to discuss. Qoheleth, who in the romance of tradition is identified as Solomon in his old age, has tried everything that this world has to offer and, ultimately, he has found it all wanting. Why seek pleasure, when pleasure is fleeting? Why seek wealth when it could be left to a fool? Why seek justice, when the just and the unjust both go to the grave? Vanities, every single one. In some places, Qoheleth does surmise that seeking wisdom and following the commandments of God are likely the best bets for something resembling happiness in this life, but even this seems more like a grasping in the dark than any kind of resolution for him. Qoheleth’s challenges to the possibility of happiness and the vanity of all worldly pursuits call into question the very purpose of creation, human life, and human effort. Qoheleth lays bare an existential crisis to which the entire rest of the Bible seeks to respond.

The New Testament answer to this question is that our lives are caught between two worlds: the old world of sin and death which will pass away and the new, recreated world of resurrection and life which will persist for eternity. When every one of our pursuits appears to be a vanity, it is because we are pursuing the things of the old world. If we focus only on things which will pass away, why would we expect our efforts to be anything but vain?

This is the point that Jesus is making in our Gospel today. The greedy man has poured all his energy into storing up more and more earthly wealth, but when he dies, all of his treasure is in the old world of sin and death which is passing away, and he has no treasure in the world of eternity; he has no wealth in the things of God.

But let’s be clear about an important point. The choice we face is not between being happy now and depressed for all eternity, and being depressed in this life so that we can be happy forever in Heaven. We Christians often fall into the flawed thinking that Christianity sucks and has to suck, but it will be worth it if we can avoid Hell. This is a lie and we should renounce it.

From where does this lie originate? This false thinking comes about because we deeply and desperately want the things of this passing world to make us happy. We want to believe that pursuing wealth, pleasure, power, and honor can fulfill us. But they never do.

Does wealth make us happy? Or do we keep seeking more and more wealth, because what we have is never enough?

Does pleasure make us happy? Or do we grow weary of our sensualities and feel compelled to seek ever newer and crazier thrills?

Does power make us happy? Or do the things we still not control drive us mad?

Does fame make us happy? Or does our hunger for the spotlight cause us to lose our very selves?

No, the things of this passing world, like wealth, pleasure, power, and honor can never make us happy, and our obsessive pursuit of them is always accompanied by profound suffering. But the things of God, which do often require sacrifice and discipline, these things do not just bring us happiness in Heaven, but they also make us profoundly happy on earth. Our relationship with Jesus is the greatest source of happiness we will ever know, and that relationship can start today.

Now, let’s look to St. Paul in our second reading, who puts flesh on these theological bones.

When Jesus rose from the dead, he inaugurated a new reality, a recreated universe in which sin and death are eliminated. When we are baptized, we rise with Jesus into this new reality. We are given citizenship and participation in Heaven, even while we still remain on this Earth. We are caught between these two worlds, and St. Paul is telling us to focus on the world that is above, the world that is of God.

Next he says, “For you have died, and your life is hidden with Christ in God. When Christ your life appears, then you too will appear with him in glory.”

St. Paul is now using the image of life, which is exactly what we have been talking about. Happiness is that place where we feel most fully alive. And where is our life, according to St. Paul? Christ is our life. Our life is hidden with Christ in God. When we let Christ live in and through us, we will be profoundly happy because our humanity will be perfected just as Jesus’ humanity was perfected.

But what does it look like to have Christ as our life?

St. Paul continues, “Put to death, then, the parts of you that are earthly: immorality, impurity, passion, evil desire, and the greed that is idolatry. Stop lying to one another, since you have taken off the old self with its practices and have put on the new self, which is being renewed, for knowledge, in the image of its creator.”

Read this line again at home, it is so rich and dense. St. Paul is telling us that, for Christ to be our life, for us to be happy, we have to make room for him in our hearts by putting to death everything in us that is still governed by this old world of sin and death. We have to fight against vice and develop virtue, because the new self is nothing less than Christ living in and through us. Our sins and vices close off our souls to Jesus, but if we can fight these we will be renewed in the image of our creator.

Finally, St. Paul says, “Here there is not Greek and Jew, circumcision and uncircumcision, barbarian, Scythian, slave, free; but Christ is all and in all.”

This line comes at the end for a reason. When we allow Jesus to live in and through us, we will always be united, because Jesus is the source of unity for all people and nations. But we cannot put the cart before the horse. This unity is the result of our holiness, it is the symptom of the underlying cause.

Often today we want to force inclusivity and community. And these are wonderful things which we ought to desire! But this inclusivity and community will always be false and fragile if we have not first worked on our own sin, because sin is the source of all division, so if sin remains, so will division. But when we make room for Jesus to live in and through us, then we will not have to work for inclusivity or community, because these naturally come from Christ being all in all, from Christ being the center of every life.

My brothers and sisters in Christ, we are caught between two worlds: the old world of sin and death which is passing away, and the new world of resurrection and life which will remain for all eternity. Qoheleth challenges us with the vanity of living for things which will pass. But praise be to Jesus Christ, the source of all life, who desires to live in and through us. In Jesus, we no longer live for vanity, but for the everlasting happiness that comes from our relationship with him. 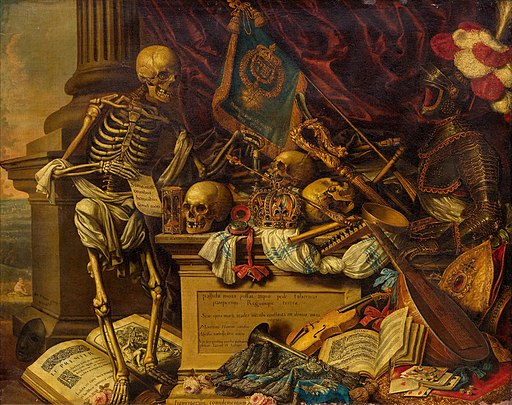