Preached at Assumption in Bellingham (All Masses)

[N.B. I had no homily last week because our deacon preaches once a month. This will be a recurring pattern.]

Two weeks ago, I went with a couple of staff members and parishioners to a conference in Colorado Springs on the topic of discipleship. Fr. Scott had worked with these folks to get this arranged, but it only happens once a year, in July, so I ended up going in his place. I was happy to do so, and thankful for the opportunity.

One of the takeaways from this conference was that, in Catholic parishes, it is not very common to talk about our personal relationship with God. We speak a lot about our history in the Church, like when we received the sacraments or whether we went to Catholic school, and we speak a lot about what ministries we participate in, but it is generally rare for us to talk about our journey to knowing and loving Jesus Christ. So, this conference argued, in order for people to grow closer to Jesus, we have to try to create parish cultures where telling these stories is common and welcomed.

And it seems that this culture should probably start in the pulpit. So, begging your indulgence for not giving the Word of God its due this Sunday, I would like to tell you about my own personal journey to Jesus.

I fell in love with the Catholic Church many years before the Catholic Church helped me fall in love with Jesus Christ. I started my life as a Presbyterian and became Catholic after my parents divorced and my mother moved home to Seattle and returned to her Catholic faith. I followed her into the Church at the same time I started 5th grade at St. Bernadette’s school in Burien. I was a dutiful child and that obedience extended to my new faith. For example, after Sister Pat taught our class that missing Mass on Sunday was a mortal sin, I would not rest until I got to church each weekend, even when I was visiting my non-Catholic family members.

But the turning point from duty to adoration came in my sophomore year of high school. At this point, it was already clear that I was academically gifted. I would later go on to get a perfect score on my SATs and be the valedictorian of my class of 180, but in my sophomore year it was just beginning to dawn on me that I felt isolated by my intellectual gifts. Of course, I had incredible, loving, and very intelligent friends whom I still deeply value, but what I was missing was someone or something that could challenge me, that I could look to as a role model or mentor, that would always know way more than I did.

Well, I found that thing in the Catholic Church. By the end of my sophomore year morality class, the Church had already impressed me twice: she had convinced me of the merits of abstinence before marriage and she had changed my mind about the suitability of the death penalty. Wondering how she could be so persuasive, I quickly realized that the Catholic Church could claim the affections, efforts, and intelligences of more of the greatest minds in human history than any other institution or culture could claim. Even though later, in college, I would have to contend with more difficult issues like abortion and same-sex marriage, from my sophomore year of high school onward I knew that the Catholic Church always had a good reason for teaching what she did, and that if I just put in the effort to learn the reasons behind the teachings, I would discover a profound and awe-inspiring wisdom. I fell in love with that wisdom of the Church and that love has yet to dissipate.

But I still didn’t know Jesus. I had a reasonable conception of God growing up. As I struggled with the same issues as many young boys in the digital age, I found incredible consolation in my Catholic high school’s chapel, where I would ask for forgiveness and beg for strength. I found the power of the sacraments of Confession and Eucharist to be indispensable in my desire to live a Christian life. But looking back on that time, I was definitely praying to a generic monotheistic God. I did not have much of a conception of who Jesus was or what set the God of the Bible apart from a nonspecific spiritual power.

But the Catholic Church wouldn’t shut up about this Jesus guy, and I loved the Catholic Church, so eventually Jesus was going to break through, which he did by the end of college. A lot of things contributed to this, but I’ll only highlight two for the sake of this homily.

First, I learned about small faith sharing groups from an organization called the Evangelical Catholic. I had been president of my college’s Catholic club for a year already, but my entire focus had been getting butts in the pews. After this small group training, I realized that giving a lot of people a shallow experience of the faith was not anywhere near as impactful as giving a smaller number of dedicated people a deep and profound experience of the faith. And that included myself. My own personal focus had been on checking the different Catholic boxes, but I had never taken the time to explore, with trusted friends, who this Jesus guy was or what he meant to my life. I was even embarrassed to use the name of Jesus publicly. So when I resolved to start a small group at my college, for the first time in my life I went to my friends and asked them if they wanted to talk about Jesus with me each Sunday morning.

A second thing that happened to me in college is that I had a conversation with the president of the Harvard-Radcliff Catholic Student Association. At this point in my life, I was driving all around Boston, chatting with other Catholic student leaders, trying to establish best practices and organize a city-wide retreat. I had spoken with a few people at this point, but I was struck with the way this Harvard leader talked about Jesus. Over the course of our conversation, without probably realizing it, she spoke about Jesus like she would about any friend, as someone she had an affection for and regular conversations with. I was so struck by this conversation that I immediately knew that I wanted a relationship with Jesus like she had. I suddenly realized that Jesus was way more than an historical figure to be studied, but that it was possible to have a personal relationship with him.

So fast-forward through the rest of college, all of seminary, and two years of priesthood, and here I am at Assumption. Obviously, there is so much more to my journey to Jesus than these brief snippets, but I wanted you to have these highlights today for two reasons:

First, I want us to realize that every one of us has a story of our relationship with Jesus. Some of us may feel further away from him than others, but all of us are continually being called to grow closer to him. It is important that our parish be a place where it is normal and expected to talk about our journeys to Jesus. Once we complete a few already-begun initiatives and programs, like the upcoming diocesan campaign, I hope we can turn our focus more toward these stories and how they might fit into our parish culture.

Second, I want you to know where I am coming from when I make tweaks to our parish life and programs. I do not want anyone to get the impression that I think Fr. Scott did this thing or that thing wrong and that I am here to fix something that I consider broken. That’s just not it! A good pastor serves his people selflessly, using the gifts, talents, and experiences that God has given him. Fr. Scott was an amazing pastor, and I aspire to follow his example of love for the people of Assumption. But we have different gifts, talents, and experiences, and that will lead us in different directions.

To offer one example: my liturgical ministers have already learned that, when they ask me a question about how we should do something in the Mass or another liturgy, I simply pull out the book and start searching the instructions. I am deeply convinced that no idea that I have is ever going to be as good as the traditions and teachings that are handed on to us by the Church. Because my personal journey was such that when I was looking for wisdom, I found it in Catholicism. My liturgical ministers have also learned that when they ask me why the Church asks us to do something in a certain way, they had better prepare for a long and historically detailed answer. Because I want others to see the wisdom that so inspired me.

These are not reactions to previous practices, but are my desire to offer myself, as I am, in service to the People of God.

In this process of transition, I have been amazed by how fast and simultaneously how slow everything seems. A lot has already happened in four weeks, and yet I feel like it will take me a whole year just to meet all of our parishioners, and maybe a decade if I want to get to know them. But God will take care of us. We are all on our own journeys to Jesus, and as long as we keep walking toward the Lord together, he will continue to meet us along the way. 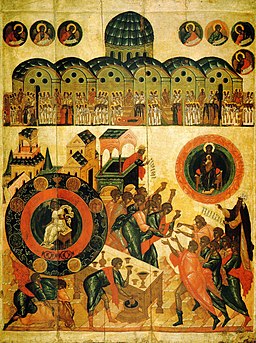