The Solemnity of the Most Holy Trinity, Year C

NB: After a quick search of Newman’s work, I could not find the reference to acorns and oak trees. However, I did find someone else quoting this analogy, so I’m hoping I am not misremembering. https://simplycatholic.com/the-development-of-doctrine/

The technical definition of the Triune God is that he is one God, possessing one nature, but existing in three persons.

A person, on the other hand, is not a set of characteristics, but a rational entity in relationship. In every case except one, one person means one nature. I, Fr. Moore, am an entity in relationship, who enacts this relationship through my human nature. When we talk about Jesus being both God and man, we are talking about the person of the Son, who has expressed his relationality through his divine nature for all eternity, but who has also taken upon himself a human nature through which he also expressed his relationality. The Son is in relationship both as God and as a human being. One person, two natures.

When we talk about God, though, we are talking about one nature and three persons. One set of characteristics, three entities in relationship with each other.

Other than Jesus constantly referencing his father, himself, and the Holy Spirit as being perfectly united, we believe that God must exist as a trinity of persons because, as St. John tells us, God is love. Love, of course, can only exist in relationship, so there has to be more than one person involved. But God is perfect all by himself. And this perfection predates creation. So God must not have needed creation to be in relationship, to be love. Which means God himself must be in relationship with himself. This is why the Trinity is logically necessary. In order for God to be an eternal relationship of love, he must be an eternal relationship of persons.

So, just to reiterate once most, three persons does not mean three gods. There is only one God who is the foundation of all being. But this one God exists in a loving relationship of three persons within himself. Following St. Augustine, we would say that the Father is the lover, the Son the one who is loved, and the Holy Spirit the bond of love between them.

Now, it is not uncommon to hear certain religious people reject this view of God. Muslims famously “corrected” what they saw as the polytheistic beliefs of Christianity. But even some followers of Jesus, like Mormons and Jehovah’s Witnesses, do not believe in a Trinitarian God, and part of their claim, especially for the Witnesses, is that the doctrine of the Trinity is unbiblical. Even certain reformed Christians, who would never dream of denying the Trinity, are uncomfortable with the terms “person” and “nature” because these terms cannot be found in the Bible.

In a sense, these critics are correct: the terms “person” and “nature” come to us from Greek culture and Greek philosophy, not from the world of Old or even New Testament Judaism. So we have to ask ourselves: does this mean that the doctrine of the Trinity, as we define it today, is a corruption of or deviation from pure Christianity? When we use philosophical terms not found in the Bible, are we contaminating the true faith?

Of course, we hear this type of argument against the Catholic faith all the time. Our Protestant brothers and sisters will claim that this sacramental or liturgical action, or that doctrine or dogma, only developed from Medieval superstition, and that the faith must be purified of these later accretions. But the Trinity is no different than the so-called Medieval corruptions, except that is comes to us from an earlier time. So we have to answer the Jehovah’s Witnesses in the same way we answer the Protestants, by addressing the question of whether the development of Christian doctrine, using the non-Biblical terms of later cultures and generations, always means that we have corrupted the faith.

The Catholic answer is yes, and it is exactly because of what Jesus tells his apostles today, “I have much more to tell you, but you cannot bear it now. But when he comes, the Spirit of truth, he will guide you to all truth.” Jesus himself tells us that he could not convey everything that he wanted to while he was still on Earth because his disciples were not yet ready for it. And so he sends the Holy Spirit to guide us into all truth. Amazingly, the Lord did not put a time limit on this guidance: we are perfectly justified in believing that the Holy Spirit continues to guide us, the Church, into all truth.

And this can be said about every Christian doctrine. We may not have been ready at the time of the Ascension, but over the course of centuries the Holy Spirit has continued to guide us to all truth through the language of the different philosophies and cultures in which Christianity has flourished. And we may not even be ready today to understand some profound truths that God will allow to develop in the generations that succeed us.

It is, however, important to establish a few principles that govern the development of Christian doctrine.

First, every essential Christian belief was given to the Apostles. Unlike the Mormons, we do not believe that there will be additional Revelation directly from God. The Apostles had the fullness of the faith, just in a very primitive form.

Second, doctrines develop, they don’t change. Whatever was given to the Apostles is today handed on to us. Along the way, through the centuries, the faith may have become more articulate, more detailed, and more nuanced, but it is the same faith of the Apostles, and that faith cannot be contradicted.

John Henry Cardinal Newman, the great saint who wrote the most about the process of the development of Christian doctrine, used the image of an acorn and an oak tree. The primitive faith, the faith of the Apostles, is the acorn, and within the acorn is everything that is necessary for an oak tree to develop. And when the oak tree develops, using the nutrients from the soil in which it finds itself, it may look very different than the acorn, but they are, in fact, one and the same thing.

The acorn, however, does not become a pine tree or a rose bush. The acorn can only become and oak tree, and if we see something else growing where we planted the acorn, we know this new thing it is not an authentic development from the acorn but is an imposter. This is why we cannot claim that the development of doctrine would allow us to overturn two thousand years of Christian teaching about, for example, human anthropology or the priesthood. The oak tree is always going to be an oak tree.

My friends, we take the Trinity for granted now, but in the first three hundred years of Christianity, its truth was not so clear cut. Though the idea had been present and common since the Apostles, it was only in AD 325 that the divinity of Jesus was confirmed by an ecumenical council, and it was only in AD 381 that the same was done for the Holy Spirit.

To me, this idea is exciting. It means that God is not done working in his Church, that he is still continually revealing himself to us. He is always doing something refreshing and life-giving. Of course we have to be well grounded in and faithful to the Christian tradition so that we can discern the difference between an oak and a pine tree, but this is all part of the adventure. There is nothing more thrilling than discovering how God has revealed himself to previous generations and how he continues to reveal himself today. 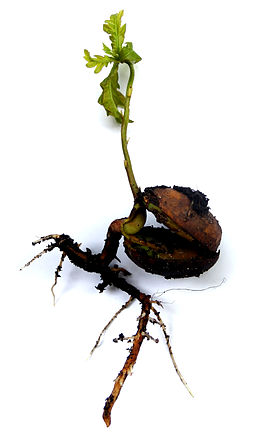