Palm Sunday of the Lord’s Passion, Year A

Our first reading comes from the second part of the Book of Isaiah, and it, along with Isaiah chapters 42, 49, and 52, is one of the four “servant of the Lord” or “suffering servant” passages, some of the most mysterious and haunting passages of the Old Testament. In these passages, we hear about an individual whom the Lord is raising up to save his people Israel. But this individual, though called by the Lord to a great purpose, is rejected and abused by the very people he came to save. The servant of the Lord brings peace and justice, but he is met with violence and persecution. In my opinion, these passages are some of the most poignant examples of dramatic irony in all of world literature, and the fact that they are about an actual, historical figure called by God for the salvation of his people makes them all the more horrific.

In addition to ironic, the servant of the Lord in Isaiah is also mysterious because, when we look at the Old Testament, we first must ask what the people of the time would have understood by the text, and this is a hard question to answer. We simply do not know what Second Isaiah intended with these passages. Was the servant the prophet himself? Or maybe the nation of Israel? Or possibly an anonymous figure who made a deep impression on the people of the time? My preferred interpretation is that these passages refer to the Prophet Jeramiah, who tried to save Judah from the Babylonians, but who was ignored, rejected, and persecuted at every turn.

Nevertheless, we simply do not know what the author of Second Isaiah had in mind. What we do know is that from the Christian perspective it is clear that these passages are fulfilled in Jesus. Jesus, who was sent by God to save humanity, suffered and died at the hands of the very people he came to save.

Given all of this, I find the first verse from our reading particularly arresting. It reads, “The Lord GOD has given me a well-trained tongue, that I might know how to speak to the weary a word that will rouse them.” The servant of the Lord is not sent to the wicked, but to the weary, which means that it is from the weary that he faces violence and persecution, beatings and spitting.

My friends, we like to think that only horrifically corrupted and morally depraved people could engage in stonings and insults and violence of the sort described in Isaiah and in the Gospels. And we like to think this because it makes us feel safe, it makes us feel like we could never be the ones acting against the servant of the Lord. But this is the opposite of true! The servant of the Lord was faced with violence, not because he confronted the very wicked, but because he sought to rouse the weary.

I am not exaggerating when I tell you that the most dangerous force in this entire world is the status quo, because the status quo, even when it is filled with corruption and injustice, makes people feel safe and comfortable. Anyone, anyone who seeks to overturn or challenge the status quo will always be met with violence and persecution, because people will always defend their comfort and their safety with deep, visceral, and violent energies.

Who are the weary, except those who have become comfortable? Those who have become numb to everything around them? Those who have accepted the world as it is and prefer that it not change? When the servant of the Lord rouses the weary, when he calls them to a better, holier way of life, he taps into these deep, hidden energies of the people, and he is opposed with the full force of a society that does not want anything to change. He is killed because he is a threat to way things have always been.

So what word does Jesus speak in order to rouse the weary? How does he get their attention, to snap them out of their status quo and call them to something much greater?

We find the answer in our second reading: “Christ Jesus, though he was in the form of God, did not regard equality with God something to be grasped. Rather, he emptied himself, taking the form of a slave, coming in human likeness; and found human in appearance, he humbled himself, becoming obedient to the point of death, even death on a cross.”

There is nothing more shocking than God himself becoming a human being; than the creator of the universe emptying himself and becoming a part of his own creation. And there is nothing more incomprehensible than this God-man going so far as to die a violent and humiliating death on a Roman instrument of torture.

THE STORY OF JESUS CHRIST, HIS SUFFERING, AND HIS DEATH, FORCES US TO MAKE A CHOICE. We cannot stand in the face of such an impossible, unbelievable, outrageous, appalling event and shrug our shoulders. We cannot remain weary once we are confronted with the Passion.

In defense of the chief priests and the Sanhedrin, at least they did not remain weary. When they were confronted by Jesus’ claims that he was sent by God and acted with the authority of God, they knew they were being forced to make a choice that they could not escape. Either they had to abandon everything they knew for this new and definitive revelation from God, or they had to punish and kill Jesus for his blasphemous claims. Yes, these religious authorities killed God himself to protect their status quo, but at least they acknowledged that a choice needed to be made, and that this choice was of utmost importance. Even Pilate’s wife spoke up, a dangerous thing for a woman of that era to do, especially when married to such a powerful man. But she knew that she could not remain silent in the face of Jesus.

Far worse is Pontius Pilate himself. Pilate ignores the challenge of Jesus’ life; he does whatever he has to do to keep the people contented; he washes his hands as though somehow he can remain neutral as he stands before God incarnate. Pilate refuses to make a choice in the face of the most shocking event that will ever occur in the history of the world.

My friends, we can never be ambivalent about Jesus. We can never wash our hands or shrug our shoulders in regard to this man from ancient Palestine. We must make a choice. Either we accept him as the one who can claim our entire life, or we reject him entirely. There is no middle ground.

And make no mistake, if we do what Pilate did and regard Jesus as just another prophet, just a nice guy caught up in some bad politics, just someone who has spiritual opinions that we can choose from like a buffet, then we are woefully ignorant of who Jesus really is and claimed to be. We reject him as forcefully as Pilate himself did by refusing to care about Jesus’s true identity as the Christ.

My brothers and sisters, let me be clear: God became man and we killed him! If this cannot rouse us from our weariness, nothing ever will. 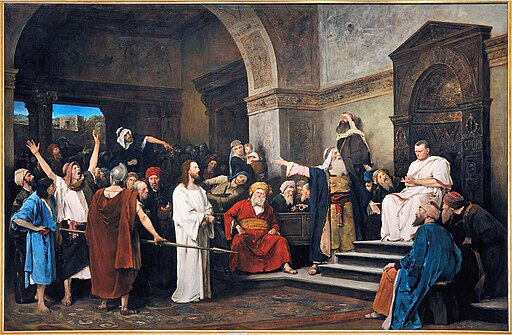