If you have ever worked in a corporate environment, or academia, or any other cutting-edge discipline, you will have experienced the phenomenon of buzzwords. A buzzword usually starts as a legitimate, cutting-edge idea. Someone has a new approach, and it bears fruit in their work, so they bring the concept to a wider audience, maybe through a book or a workshop. In order to appear the be on the cutting-edge, specialized groups all over the country start talking about this concept, but often without fully understanding it or without actually making the systematic changes the new concept requires. Eventually, this word becomes meaningless, because everyone is using it to look cool but no one is actually implementing it.

One example today might be “green”. We have congresspeople talking about a “Green New Deal” and every new building is built to be “green” and we have “green” lifestyles and “green” technologies. And while some of the ideas of the green movement are new and innovative, a lot of people will simply use the word as a new marketing spin on whatever they were already doing. Something similar could be said about organic. Or sustainable.

Well, the Christian and Catholic worlds have their buzzwords, too. For the past few years, the biggest buzzword has been “discipleship.” We are supposed to be making disciples, training disciples, evaluating our success based on the number of disciples. In fact, as our Archdiocese tries to figure out how to serve more people with fewer priests, we ourselves adopted the standard that a good parish is focused on discipleship.

And yet, the original conception of discipleship is incredible and amazing and could very well transform how we think about parishes and ministry, and so I think it is essential that we reclaim the term.

What then, is discipleship? The best example I have ever found comes from today’s second reading. St. Paul says, “I consider everything as a loss because of the supreme good of knowing Christ Jesus my Lord. For his sake I have accepted the loss of all things and I consider them so much rubbish, that I may gain Christ and be found in him.” This is the declaration of a disciple.

Of course, not everything in our life is opposed to Jesus. Choosing Jesus above all things does not always mean giving up everything we own and running out to a desert monastery (though, for some people, this is exactly what it means). Oftentimes, Jesus allows us to have him and family and a good job and ordinary enjoyments. But, when any of these things come in conflict with Jesus, choosing Jesus above all things means that Jesus always wins. When I was in college, for example, I focused a lot on student government, which meant getting elected to various offices. But when I had to choose between my popularity and defending the moral and sexual teachings of the Church, I chose the Church. Or, when I felt called to the priesthood, and I knew that the Protestant side of my family would not react well, I still chose to follow Jesus and to sacrifice those family relationships for the couple of years it took them to come to terms with this call. These were two important discipleship moments for me.

We all face choices like this. Every single one of us has had to choose between Jesus and our favorite sin. Or between society and the teachings of the Church. Or between what God seems to be calling us to do and what we want to do. We constantly face the choice to be disciples or not. To choose Jesus in every case, or not.

The reason discipleship matters for our parishes is because discipleship is learned and developed. None of us begin our lives as disciples. And most of us can list multiple times that Jesus did not win when we had to choose. But all of us are called to become disciples, and it is the mission of our parishes to bring all people along the path of discipleship. Notice I did not say it is the mission of the preacher. It is the mission of the parish, which means priest and parishioners and programs. All of us are responsible for becoming disciples ourselves and then reaching out to help others along the way. If we do our job as Christians, then every person in the Skagit Valley will consider everything as loss compared to the grace of knowing and following Jesus Christ.

So how are our parishes supposed do that?

First, we offer the worship of Almighty God in the Mass and the grace of Jesus in the other sacraments. No one will have any motivation to follow Jesus if they do not realize the difference he can make in their lives. Only when someone has experienced the grace of God in worship and especially in the sacraments will they realize that God is worth following.

Second, we offer education, partly through preaching and partly through programs. It is impossible to choose Jesus if we do not know who he is. Without learning about God, we will not be able to differentiate between following Jesus and following Deepak Chopra.

Finally, we offer opportunities. When someone has a desire to follow Jesus, but no outlet for living out that desire, it is easy for the desire to wither and die. So our parishes offer endless opportunities to choose Jesus. Sometimes they are opportunities in the background, like cleaning and decorating the church or helping in the office, that are about choosing to give time to Jesus. Sometimes they are public, faith-based opportunities, like being a faith formation teacher or leading a small group. Sometimes they are social justice opportunities focused on the poor and the marginalized, like serving at the food bank or praying outside of Planned Parenthood. And sometimes, especially for those who cannot give time, they are financial opportunities, like helping out with parish or Archdiocesan drives or giving to important Catholic charities through the second collections. Most of us do not regularly face life-altering choices between Jesus and something else, so our parishes provide small, daily opportunities to choose Jesus above time, money, or comfort, and to continually grow in that choice.

My friends, I want every one of us in this Church today to be able to make words of St. Paul our own: “I consider everything as a loss because of the supreme good of knowing Christ Jesus my Lord. For his sake I have accepted the loss of all things and I consider them so much rubbish, that I may gain Christ and be found in him.” I want us to be able to say that the most important thing to us, above all else, is Jesus.

If I can make a recommendation, let’s ask where we are with Jesus and what the next step is. Maybe we haven’t made room to experience the grace of God in our lives, and we need to make more room for the sacraments, for Mass, and for prayer. Maybe we know God is important, and the next step is to learn more about him, through classes or prayer groups. Or maybe we are ready to make a weekly choice for Jesus by joining a parish ministry or by tithing more intentionally.

No matter where we are, Jesus will meet us there and help us along the way. One small choice for Jesus leads to another and to another. When we choose Jesus, we choose peace, joy, fulfillment, goodness, truth, beauty, light, and life. We choose God himself, the one for whom our hearts long. Our discipleship is so much more than a buzzword: the decision to choose Jesus is the best and most important decision we will ever make. 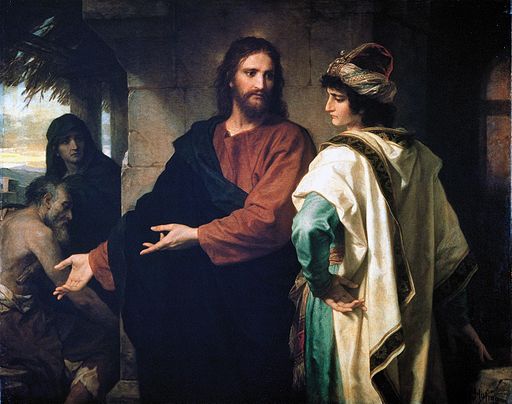