An exceptionally helpful podcast about how anger at God is necessary and helpful.

Last Monday, I met with my priest support group down in Bothell. I, like many priests, find it important to be part of a priest support group because of the unique nature of priestly life. In Western Washington State, for example, there are 5.6 million people, but only 300 priests, which can make a guy feel odd and lonely. So we find it helpful to get together monthly with other priests to talk about our lives and our struggles, and to keep each other on the path to holiness.

In my group, we have a check list against which we evaluate our month. On my check list, I hold myself to requirements of the Church as well as some spiritual practices: praying my breviary, saying Mass daily, living healthy chastity, praying for an hour each day, going to Confession, and going to spiritual direction. When I was first ordained, I struggled especially with praying for an hour each day and going to spiritual direction, but thanks be to God I have gotten fairly consistent in meeting my commitments.

However, in addition to going through the check list, it is important to me to talk about the movements of my prayer, and where I am in my relationship with Jesus. Some guys prefer to talk about these things exclusively with their spiritual director, but I am not shy about sharing, and would rather get multiple opinions rather than just one. So this month I shared with my group about my continued struggles with prayer, and some recent insights that I had about where these struggles might come from. I shared that I had been reflecting on a significant period in my life where I felt abandoned by God, and that this trauma was likely not healed and might still be preventing me from actually trusting the Lord with my heart. And, in turn, because I still felt hurt by and cautious around the Lord, I was continually looking for distractions during my holy hour, rather than trying to turn to Jesus and speak to him directly. In other words, my still aching heart was causing me to treat Jesus more like a coworker than an intimate companion.

My group’s recommendation was something that I already knew but needed to hear from them: they told me that the only way to heal a relationship is to invest in it, rather than to run from it. That, whenever I was in the chapel, I needed to try to spend one additional minute in conversation with the Lord before I ran to distractions. If I kept trying to add one minute to whatever I felt capable of, I might eventually be able to sustain a conversation with Jesus for 15, 30, or even 60 minutes at a time. Putting in the small effort to add a minute would slowly teach me to fight back against this desire to run from the Lord.

My friends, I do not want to do this. As anyone who has experienced heartbreak can tell you, it is painful to turn back to the one who has hurt you. I do not want to experience the pain of making myself vulnerable to God again. Of course, as a spiritual director, I know my group is right. When our hearts feel hurt or abandoned by God, which is very common, the only solution is to turn back to him, not to run from him. And as someone who works with married couples, I know that it can be so easy to let a heartbreak fester and for a relationship to grow cold, if we do not face the problem directly and communicate about it. I know that I have a choice between doing the hard work for my relationship with Jesus or saying that everything is fine, and resigning myself to a dry and burdensome half-relationship that will never go anywhere.

I tell you this, partly so that you can understand that priests struggle, too, but mostly because it speaks to our second reading from St. Paul today. St. Paul is telling the Corinthians that the Jews of the Exile went through all of the religious and sacramental motions. They were baptized and they received spiritual food and drink. And yet, even despite this, they desired evil things and were struck down in the desert. St. Paul’s warning to the Corinthians is that, yes, they too have been baptized and, yes, they too have received spiritual food and drink; but, if they are not careful, they, too, will fall into desiring evil things and be struck down. In other words, going through the religious and sacramental motions is not enough, because we can still fall away from the Lord.

In the context of my story, I could have just stuck with the checklist. I was doing everything that the Church required of me and that I required of myself. From an objective perspective, I was being a good priest. But had I stopped there, I would have eventually failed. I would have died in the desert, because there was something wrong with my relationship with Jesus, and to leave it unaddressed would have withered my spirit. The choice to bring my struggles to my group was incredibly important, because it was a choice to grow rather than to stagnate.

This is, ultimately, a choice that we all face. Any of us can check the boxes and be an objectively good person. Anyone listening to this homily has already checked the very important and very significant box of attending Sunday Mass. And many of us have also taken on daily prayer commitments, sometimes even a daily Rosary. These are all good and wonderful boxes to check! But St. Paul warns us that merely checking boxes can still lead to our destruction if we are not also working to grow.

My brothers and sisters in Christ, to be honest with you, I do not really care if you are a horrible sinner or an exemplary saint. I do not really care exactly how many boxes you are or are not checking. Instead, I care so much more about your spiritual trajectory. Are you currently moving closer to God or further away from him? Regardless of where you started, or where you are right now, are working to make things better in your spiritual and moral lives, or are you letting things get worse?

Some of us might be tempted to choose a middle option and say things are “fine,” but let’s be clear: standing still is a form of moving away from God. The truth of life is that, in all things, we are either growing or we are dying. A computer engineer who does not keep up on the latest technologies will not long be effective at her job. A teacher who does not engage in continuing professional development will soon grow stale in the classroom. And a Christian who is not working to grow closer to the Lord will slowly drift away from him.

This drift may not be perceptible at first. It may begin by slacking on daily prayers, or going a longer time without confession, or skipping a couple of Sundays during the summer. But, eventually, small movements add up and a drift can become a chasm. Complacency, that is, our belief that everything is fine as it is, complacency is the great and silent enemy that suffocates us while we sleep.

My friends, I had a choice: check the boxes and tell myself that everything was fine, or do the hard thing, engage my problems, and try to grow. This is a choice we all face. 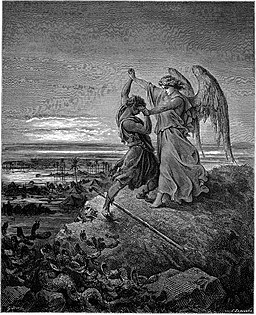