The Solemnity of Our Lord Jesus Christ, King of the Universe

Recording (will be posted to https://jhm718.podbean.com)

While Moses also served as a prophet and a sort of king, and David and Elijah as occasional priests, these offices were generally distinct, balancing each other out very much like the three branches of American government. However, as Israel realized more and more the deficiency of their situation, and began to look for a Messiah to bring about their definitive salvation, they began to expect that the Messiah would be the fulfillment of each of these three offices: the new Moses, the new David, and the return of Elijah. In the Messiah, all three offices would be united and perfected, which is exactly what happened with Jesus. Jesus is the new Moses, bringing with him a new law and a new sacrifice. Jesus is the new Elijah, preaching a new holiness of life through self-sacrificial love. And Jesus is the new David, shepherding his people in a new and definitive society, which is his Body the Church. He is perfectly and eternally priest, prophet, and king.

Now, I need to stop here to combat a false notion that is very common in American Catholic thought. When I say that every single one of us is a priest, a prophet, and a king, we American Catholics think that each of those offices are only carried out here at the parish, often times by the priest or a parish program. When we think about our priesthood, we think only of the Mass. When we think about being a prophet, we think only about faith formation programs. And when we think about being a king, we think about serving on a parish committee or maybe volunteering for a social justice ministry. These are all good things, of course, but it does not fully appreciate the gravity and the necessity of the role of the laity.

There are two ways to participate in the offices of Christ. All of us participate by baptism. Some of us, like myself, participate in a different way through the sacrament of Holy Orders. Those of us who are ordained are specifically called to serve as priests, prophets, and kings for the Church, for the community of the baptized. It is my job to offer worship in and at the head of the Church. It is my job to preach the faith to the Church. And it is my job to govern and shepherd the Church. We have many dedicated employees and volunteers who join and assist me in these ministries, but they are, primordially, ordained ministries. It is always ordained priests who lead the Church in her worship, in her teaching, and her governance, not because of outdated traditions or clericalism, but because theologically this is exactly the purpose of Holy Orders and exactly why Christ established the priesthood.

The laity, on the other hand, are called to serve as priests, prophets, and kings in the world. Please understand, the laity are equal in dignity and importance to ordained ministers, and their priesthood, prophetic office, and kingship are also equal in dignity and importance. The only difference is the focus. Ordained priests minister inside the walls of the parish, while the laity take the offices of Jesus out into the world. The lay priesthood is found in the offering and sacrifice of secular work, in prayer together as a family, in uniting everything in life to the Lord Jesus. The lay prophetic office is found in the example of a holy life, in counseling the struggling and the doubtful, in helping lost souls discover and rely on the Lord Jesus. And lay kingship is found in secular politics, in social justice, in the proper ordering of the temporal world.

But on this Solemnity of Jesus Christ, King of the Universe, we have to admit to ourselves that the office of king has been negligently abandoned by ordained and lay Catholics alike. We have not allowed Christ to be our king for a long time, and we are suffering greatly for it. The failures in kingship of the ordained should be obvious by now. We clergy have failed to protect our people from the scourge of sexual abuse. We clergy have allowed our parishes and parishioners to be ravaged by heresy, poor catechesis, negligent and experimental liturgies, and a general degradation of the Catholic faith. We clergy have watched multiple generations of young Catholics abandon the faith and we have failed to take swift, decisive, and radical action to reverse the trend. We clergy have been more invested in the preservation of our institutions and our status quo than in caring for the People of God during a particularly tumultuous and chaotic century. We clergy have chosen our own safety and comfort over the well-being of those who have been entrusted to our service.

Less obvious, however, has been the abandonment of the kingly office of the laity, though the effects are noticeable enough. If secular affairs are the responsibility of the laity, how are things going? We have a society so filled with hatred, anger, and distrust that major cities have been subject to widespread rioting and anarchy; and people would rather believe that a shadow government is trying to abolish their rights than that a mask might prevent the spread of germs. We have a political system that is so divided, self-interested, and power-hungry that an American President and his followers are endangering the truly sacred American tradition of a peaceful transition of power between rival parties, and our President-Elect, though professing to be a Catholic, had to sell his soul to Planned Parenthood to be elected to office. And we have an economic system that fails to guarantee that the hungry have food, the thirsty have drink, the strangers are welcomed, the naked are clothed, the ill are cared for, and those in prison are visited; a system that is not helped by a disinterested citizenry that does not feel personally responsible for addressing these shortcomings. Things are not going well.

In our democracy, it seems that everyone wants to be a king, but nobody wants to be a king like Christ. Nobody wants to act selflessly. Nobody wants to recognize self-sacrifice as noble rather than cowardly. Nobody wants to compromise with the opposing tribe, let alone think of them as fellow human beings. We have strayed very far from the men that John F. Kennedy wrote about in Profiles in Courage. It makes me wonder if the separation of church and state has finally been brought to its logical conclusion: by being forced to remove Christ more and more from our engagement with secular affairs, secular affairs have begun to look more and more like the domain of the antichrist.

My friends, we must not be afraid to allow Christ to reign in every aspect of our lives, including and especially those parts of our lives that happen outside these parish walls. Only in this will we find the antidote to the corruption and destruction that surrounds us. We have, for too long, kept our faith locked up at church, separated from our families, our work, and our politics. But it is time to stand up and say, “No more!” It is time that we allow, even demand, that Christ be king of everything.

He must first reign in our hearts. We must not shy away from a robust and confident Catholicism that sees our faith as a precious gift handed on by previous generations, a gift that continues to unfold in more and more beautiful ways the longer we gaze at it, a gift that shows us the face of Christ himself. We must be obedient to this faith, so that Jesus can use it to form us and shape us into true Christians and evangelical saints. Our resistance to the faith is our resistance to the kingship of Jesus.

Second, we must allow Jesus to reign in our families. Our families must be ordered as Christian communities. They must be the foundational places where love is shown through selflessness, empathy, and caring. Where our disagreements are resolved with honesty and repentance. Where we care for each other in our vulnerabilities. Where our wounds are healed, not exacerbated. If husband and wife can image the love of Christ and his Church, and the children can be raised to love and follow the Lord, then the home becomes a sanctuary, a type of tabernacle. There is no more powerful expression of the lay vocation than when the parents of a family act as priests, prophets, and kings in their own homes, by leading with their own example of prayer, virtue, and justice.

Finally, once King Jesus reigns in our hearts and in our families, he will begin to reign in our communities. The influence of Christ in our intimate places will spill over into our public places, like our workplaces, our schools, and our immediate neighborhoods. We will more naturally make sacrifices and show empathy to those who surround us. Jesus will begin to exercise his kingship in the world through our everyday interactions.

And, if I can make one final plea, let’s have our focus end here. National and state politics are toxic and absolutely destroying us, even though we have very little control over them. Shut off the news and talk to your neighbors. Our focus needs to be on ourselves, our families, and our communities. If Jesus does not reign in Bellingham, Washington he will never reign in Washington D.C.

My brothers and sisters in Christ, you, each and every one of you, you are kings. All power has been given to Christ by his Father, and Jesus has given that power to you. Will you accept this fearsome and weighty responsibility? Will you take upon yourselves the mantle of David, whose office you now hold, in order exercise the kingship of Christ in your hearts, your families, and the world? 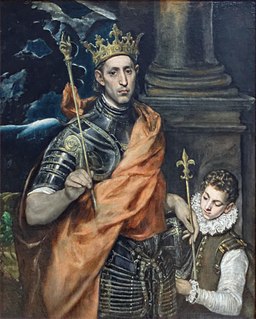 “Louis IX” by El Greco. St. Louis is one of the best known canonized kings.