At some point in every Catholic’s life, we are faced with the idea that the Church is nothing more than a bunch of outdated rules. Sometimes we hear this first from our family and friends, but the majority of us struggle with this idea personally. We ask ourselves why we should stick with an institution that just seems to want to tell us what to do all the time.

This is an especially irksome question if we do not understand why the Church teaches what she does; if we believe that the moral teachings of the Church are nothing more than an exercise in absolute authority and blind obedience. Since undergraduate, I have dedicated my whole life to explaining to people why the Church teaches what she does, and I will continue to do so for the entirety of my time here at Assumption, so we are not going to jump into any specific explanations today. Those will come in time. For the moment, I simply want us to understand that every moral teaching of the Church is oriented towards our holiness. Whether we think she does a good job or a bad job of it; whether we think she has everything right or everything wrong, it will help us if we can realize that, when the Church teaches, her goal is to form us more and more in the image of God by helping us to act in accord with the teachings and example of Jesus Christ. Well executed or not, her goal is our holiness.

This brings us to our first reading from the Book of Wisdom, a reading that contains a profound reflection on how and why God himself calls us to holiness. Once we understand God’s own standards for the call the holiness, we can then better evaluate whether the Church, her ministers, and her members are following these standards.

Let’s start with the last lines of the first reading, which say of God, “Therefore you rebuke offenders little by little, warn them and remind them of the sins they are committing, that they may abandon their wickedness and believe in you, O LORD!”

The first standard here is that God does rebuke offenders; God does remind people of their sins. He does not take the approach we often take and pretend like there is no such thing as sin or pretend like it is someone else’s responsibility to talk about sin. God does not compromise with evil by ignoring it and hoping that it will go away. But, notice why he points out our sins. He is not doing so as some kind of holier-than-thou power trip, another trap that we ourselves fall into. God rebukes offenders “[so] that they may abandon their wickedness and believe in [him.]” The focus is squarely on the other person and what is best for them, which is salvation through belief in and unity with God.

The second standard presented here is that God does all of this little by little. In modern pastoral parlance, we would say that God “meets people where they are at.” Why does he do this? Shouldn’t he treat it like a band-aid and get all of the pain over at once? The reason he calls us to holiness little by little is because we could not stand to be presented with all of our sins at once. We would be so overwhelmed that we would be paralyzed into inaction, or we would flee never to return. So instead, God meets us where we are at, and slowly reveals to us the things we need to work on or remove from our lives so that we can better follow him. God calls us to holiness in manageable chunks, because he wants us to succeed, and humans succeed little by little.

Interestingly, in this reading there is also a third standard, one which seems paradoxical and confusing. One that gives us the context for our Gospel. The reading says of God, “You overlook people’s sins that they may repent.”

The reason this seems paradoxical is because when we talk about overlooking people’s sins, we do so because we want to avoid requiring repentance. We are deeply attached to the idea of “live and let live.” And yet, somehow, the Book of Wisdom suggests that God overlooks sins specifically to bring about repentance. Somehow, when he does not focus on our sins, we become far more motivated to work on them. How can this be?

Remember what we just said about God meeting us where we are at. If we were confronted with all of our sins at once, we would be crushed and tempted to flee. Instead, we only have the freedom to repent because we first understand that we are loved. We cannot admit our sins if we believe that those sins will result in condemnation. We can only admit our sins, and be truly sorry for them, if we know that in admitting them, we will find forgiveness and peace. When Wisdom says that God overlooks our sins that we may repent, it is telling us that God does not begin with our sins. Instead, God begins with absolute and infinite love. But this love is so purifying and so convicting that once we have received this love, we naturally feel the call to repentance. The love of God automatically draws us toward conversion and holiness.

I do not have to enumerate all of the ways in which the Church or her members have failed at these standards. We have all seen the hierarchy and the laity be so permissive of sin that they ignore it entirely or be so focused on sin that the infinite love of God is stifled and obscured. We have experienced the destruction that comes from both extremes.

Instead, what does it look like for the Church and her members to follow these standards, and to call people to holiness the way God calls people to holiness? This is a question I have to ask myself constantly, every day, every time I am faced with someone who is living in an irregular marriage situation, or who has chosen their politics over their religion, or who is struggling with issues of gender and sexuality.

In my reflections, I have come to two conclusions.

On the one hand, I am not going to soften or avoid the teachings of the Church. Before I was ordained, I made a public vow, before God and his People, to uphold the magisterium of the Church in its entirety, and I intend to keep this vow. More importantly, I do not know any surer path to holiness and salvation than Catholic teaching, so the most loving thing I can do for my parishioners is to direct them towards this path. This is what God himself does: he does not ignore the problems in our lives, but instead calls us ever close to himself by pointing out these problems so that we can remove them as barriers to holiness.

On the other hand, in light of the other standards from the Book of Wisdom, it is equally true that it is my solemn responsibility to accompany every soul who walks through our doors, no matter their past and no matter their present; to meet them where they are and to help them to grow from there. And it equally my solemn responsibility to preach the infinite love of God for every soul, a love displayed most powerfully in Jesus’ sacrifice on the Cross. In fact, in the order of things, I am called to lead with this love in all things, as Jesus did with Zacchaeus, because only once Zacchaeus knew that he was loved and welcomed did he have the motivation and the freedom to address the difficulties of his life situation. Only once Jesus asked to dine with Zacchaeus did Zacchaeus make preparations to dine with him.

My brothers and sisters in Christ, if we here at Assumption dedicate ourselves to following the will of God and imitating him in all things, including his call to personal holiness, two characteristics will be true of our parish.

Second, every single person in Bellingham will know that Assumption is not a place of stagnation, but a place of growth. A place where our people push each other to be better, to be holier, to be more loving every day. A place where acceptance does not simply mean “come as you are” but means “start where are and walk with us to as you strive to become the person God created you to be.” Every single person in Bellingham will know that if they want to grow in holiness, they should come here.

Historically, the world-wide Church and every local parish has struggled to develop both of these characteristics. But today we have been reminded how to get there: preach the infinite love of God, welcome people where they are at, and be a community that calls each other to greater holiness. If we can just do that for the rest of our lives, we might get close. 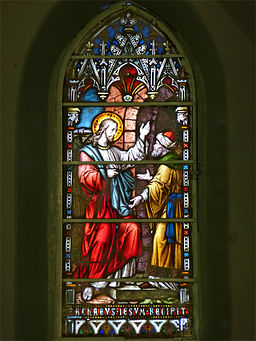